In 1955 the police station of Hopkinsville, Kentucky was swarmed by members of the families that shared a farmhouse just outside of the town. They reported that the house was under attack by extra-terrestrial creatures, but a police investigation only uncovered bullet holes and shattered windows, and evidence that the families were mostly drunk at the time of the incident. The aliens reported in the story became known as the “Hopkinsville Goblins”, and became an infamous local cryptid, though there were no reported sighting since. Experts believe that a combination of alcohol, a meteor sighting, and aggressive owls led to the supposed sighting. This game is inspired by that story, told from the perspective of the owls.

Hopkinsville Goblins are owls trying to scare off a group of drunk vacationers. The players are a group of outlaw owls hiding from the law in an abandoned building until a group of rowdy vacationers moved into the building and forced you out. Fearing discovery by owl law, you decide that your only option is to scare them away using the same grift you used back in the day: alien impersonation.

This is a game for two to four players, with no GMs. The game is played in a series of six loosely-structured scenes. You need an eight-sided die and at least three six-sided dice to play.

Tip me on Patreon.

In order to download this game you must purchase it at or above the minimum price of $3 USD. You will get access to the following files:

Support this game at or above a special price point to receive something exclusive.

Each copy of Hootgoblins you buy helps someone else grab a free copy if their budget doesn't enable them to pay the listed price. If you're unable to budget for a copy of Hootgoblins priced as listed, please claim one of these free copies for the community.

Right, so, this is a storygame that leads with a d8 table of different types of regionally-appropriate owls and I'm not sure why anyone out there is designing games specifically for me as a person, but I'm grateful.

Hootgoblins follows a historical incident in 1955 Kentucky that led to a 'mass cryptid sighting', but it puts its own spin on the event, adding a flavor that reminds me of things like Honey Heist or Crash Pandas.

There's one spot where it might benefit from a rules clarification (the rules for complications seem to be roll twice per group, not twice per player,) and there's a single cuss word (so you might have to rephrase a dice table entry on the fly if you're running this as an all-ages game,) but these are fundamentally just quibbles.

That said, the game is GMless, and it does a lot of 'just act out a scene' direction, which is really not my thing. Whether or not the PCs succeed (or even live, as the game pretty directly implies) is also down to pure luck. On the flipside, it's really easy to add a GM if your group wants one. The mechanics don't shift much, and it can help to have someone in charge of the humans in the story. It's also pretty easy to graft some mechanics on that give the players a little more control over the narrative. Again, this goes against the grain of the 'act out a prompt' style of the game, but if you're like me this may make the game easier to play.

Overall, I think this is completely worth checking out for the historical context and fun writing alone, but it's also a neat concept and makes for a great one-shot or potentially a warm-up exercise before a longer, acting-heavy game. I would definitely recommend it.

somebody watched the fourth kind

You get to be owls pretending to be cryptids and scare away drunk people! Who wouldn't want that? 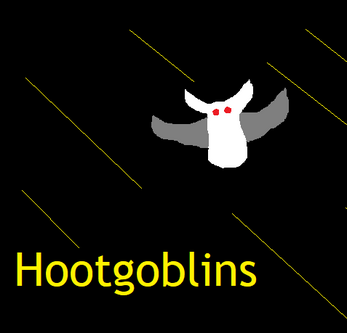